In 2018, the Ministry of Justice reported that, compared to white people:

These patterns, shown in contemporary official statistics, reflect a pattern that first emerged in the 1970s, suggesting what appear to be higher levels of criminality among some minority ethnic groups, particularly the black population. 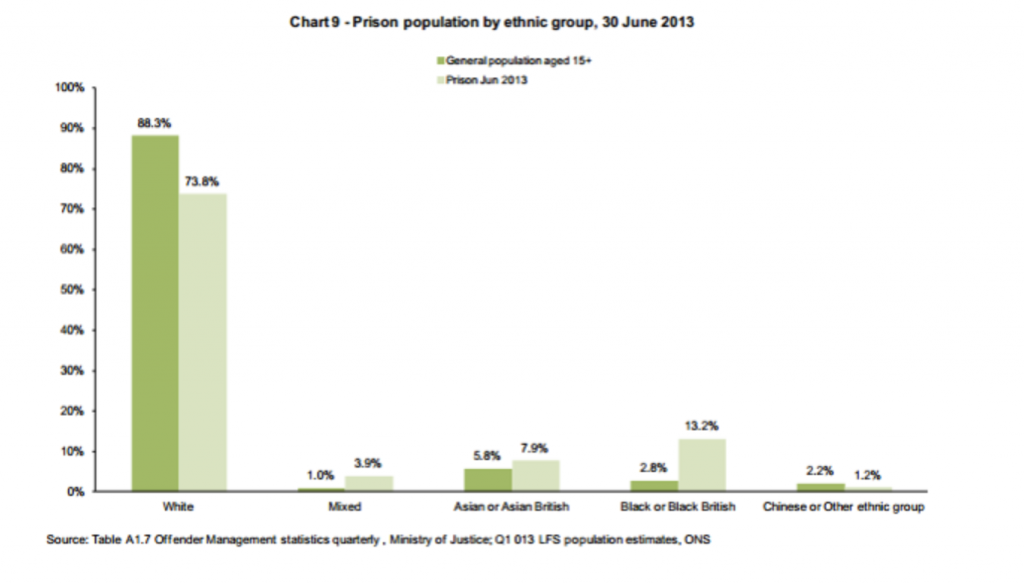 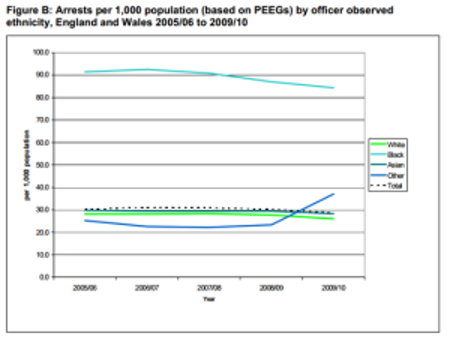 Explanations for links between ethnicity and crime

Higher crime rates might reflect that compared to white people, minority ethnic groups tend to have higher proportions of young people, those suffering social deprivation and those living in deprived urban communities, rather than greater criminality arising from ethnicity itself.

Policing The Crisis (Hall et al, 1978) – Hall examined the moral panic over “mugging” in the early 1970s, using Marxist insights. Selective and stereotypical reporting represented young black men as potential muggers and given the role of folk devils. In fact, mugging (not an official category of crime in any case) was not increasing dramatically.  Hall explained the moral panic in terms of a crisis of British capitalism: the state deflected attention on to a small group who could be scapegoated and on whom the state could be portrayed as cracking down firmly, using new repressive policing which would be useful in tackling future unrest. Young blacks were suitable for this role because of their visibility and powerlessness in the sense of lacking organisations or representatives to speak on their behalf.

The Political Nature of Black Crime (Gilroy) –  Gilroy, a Neo-Marxist, agrees that young blacks are targeted by the media and the police, but argues that black crime is different in that it is a conscious continuation of anti-colonial struggles in the West Indies, just in a new context. It is therefore black crime is political and potentially revolutionary, a political response to inequality and discrimination. Rastafarianism, for example, is not just a religion; it contains a set of revolutionary political ideas about overthrowing white authority (“Babylon”), and tends to bring its followers into confrontation with the police over, for example, marijuana use.

Lea and Young (1984): High levels of crime really do exist in inner city areas where there are often high numbers of members of ethnic minorities and draw attention to the fact that those who live here are the main victims of crime as well.  Their explanation of crime is based on the concepts of:

The over-representation of Afro-Caribbeans in crime statistics is a social construct, created as a result of discrimination towards blacks and Asians by the police and other criminal justice agencies. There is considerable evidence of racist views held by police officers.

Black and Asian offenders are more likely to be:

This suggests that they are treated unfairly by the criminal justice system.

After the murder of Stephen Lawrence in 1993, the Macpherson Inquiry claimed that the police are characterised by ‘Institutionalised Racism’. This is racism that is not necessarily intentional but that the day-to-day activities of the organisation are based upon racist ideas and practices i.e. Racism is ingrained in the system.

‘The Police operate by procedures, practices and a culture that tends to exclude or to disadvantage non-white people’

Reiner (2000): Canteen culture amongst the police, including: suspicion, macho values and racism, which encourages racist stereotypes and a mistrust of those from non white backgrounds.

Bowling and Phillips (2002): Higher levels of robbery among black people could be the product of labelling that arises from the use of regular stop and search procedures, which in turn leads to the self fulfilling prophecy.

Sharp and Budd (2005): Black offenders were most likely to have contact with the criminal justice system in their lifetime and were more likely to have been arrested, been to court and convicted. This is despite their lower levels of offending compared to white people generally and white youths in particular.

If police discrimination accounts for the high number of young blacks arrested, then the police must discriminate in favour of Asians, since fewer are arrested, than whites – which seems very unlikely.

In the past, Asians did fit a police stereotype of a typical offender, the illegal immigrant.  Explanations for the low levels of Asian criminality have looked at the strong religious and family ties within the Asian culture which help them to cope with the disadvantages and discrimination they might face.

Email for feedback and discussion, or ask any questions to rsyposz@netherhallschool.org